iPad Pro Manual User Guide has specially to guide you the functions and features of your Apple iPad Pro. You can download or read here.

iPad Pro is a tablet computer designed, developed, and marketed by Apple Inc. Announced on September 9, 2015, the iPad Pro was released on November 11, 2015. The tablet features a 12.9-inch screen, larger than all previous iPad models. Three configurations are available: Wi-Fi-only models with 32 GB or 128 GB of storage space, and a 128 GB model with Wi-Fi/cellular connectivity. iPad Pro is the first iPad to feature LPDDR4 RAM. 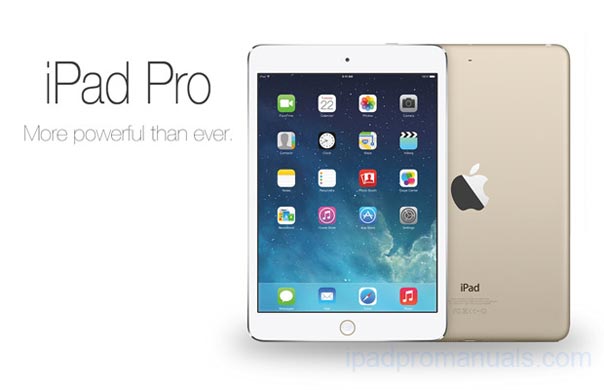 The iPad Pro is powered by a brand new A9x chip, which according to Apple offers twice the memory bandwidth of the A8x (within the iPad Air 2), twice the flash storage speed, 1.8x better overall performance and twice the GPU processing power.

Apple iPad Pro runs on iOS 9 by default and it supports picture-in-picture and spilt screen view.

NOTE: For open or reading this manual, your computer need Adobe Reader. You can get the Adobe Reader by going here https://get.adobe.com/reader/